[Paleontology • 2018] Saltriovenator zanellai • The Oldest Ceratosaurian (Dinosauria: Theropoda), from the Lower Jurassic of Italy, Sheds Light on the Evolution of the Three-fingered Hand of Birds

Abstract
The homology of the tridactyl hand of birds is a still debated subject, with both paleontological and developmental evidence used in support of alternative identity patterns in the avian fingers. With its simplified phalangeal morphology, the Late Jurassic ceratosaurian Limusaurus has been argued to support a II–III–IV digital identity in birds and a complex pattern of homeotic transformations in three-fingered (tetanuran) theropods. We report a new large-bodied theropod, Saltriovenator zanellai gen. et sp. nov., based on a partial skeleton from the marine Saltrio Formation (Sinemurian, lowermost Jurassic) of Lombardy (Northern Italy). Taphonomical analyses show bone bioerosion by marine invertebrates (first record for dinosaurian remains) and suggest a complex history for the carcass before being deposited on a well-oxygenated and well-illuminated sea bottom. Saltriovenator shows a mosaic of features seen in four-fingered theropods and in basal tetanurans. Phylogenetic analysis supports sister taxon relationships between the new Italian theropod and the younger Early Jurassic Berberosaurus from Morocco, in a lineage which is the basalmost of Ceratosauria. Compared to the atrophied hand of later members of Ceratosauria, Saltriovenator demonstrates that a fully functional hand, well-adapted for struggling and grasping, was primitively present in ceratosaurians. Ancestral state reconstruction along the avian stem supports 2-3-4-1-X and 2-3-4-0-X as the manual phalangeal formulae at the roots of Ceratosauria and Tetanurae, confirming the I–II–III pattern in the homology of the avian fingers. Accordingly, the peculiar hand of Limusaurus represents a derived condition restricted to late-diverging ceratosaurians and cannot help in elucidating the origin of the three-fingered condition of tetanurans. The evolution of the tridactyl hand of birds is explained by step-wise lateral simplification among non-tetanuran theropod dinosaurs, followed by a single primary axis shift from digit position 4 to 3 at the root of Tetanurae once the fourth finger was completely lost, which allowed independent losses of the vestigial fourth metacarpal among allosaurians, tyrannosauroids, and maniraptoromorphs. With an estimated body length of 7.5 m, Saltriovenator is the largest and most robust theropod from the Early Jurassic, pre-dating the occurrence in theropods of a body mass approaching 1,000 Kg by over 25 My. The radiation of larger and relatively stockier averostran theropods earlier than previously known may represent one of the factors that ignited the trend toward gigantism in Early Jurassic sauropods. 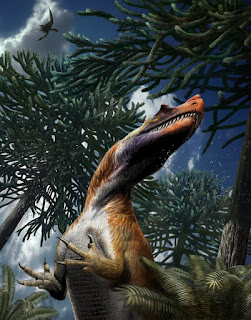 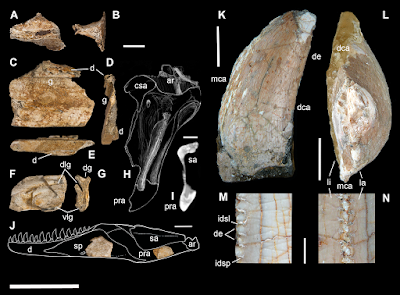 Etymology. Saltrio, Italian toponym name, from the locality where the holotype was found; venator, Latin word for hunter, it also refers to a type of Roman gladiator; zanellai, Latin genitive dedicated to Angelo Zanella, who discovered the fossil.

Comments. As noted above, the discovery of all skeletal elements at the same time in a very restricted spot, the fact that all of them are of matching size, and that fragmentary and anatomically adjacent elements are of matching morphology, leave no doubt that all bones referred to the holotype come from the same individual. We prudentially exclude from the holotype the single tooth, which was found relatively associated to the bones but lacking its root and any jaw bone connection, thus raising the doubt that it might represent a shed tooth.

Diagnosis. Mid-to-large sized ceratosaurian characterized by the following unique combination of anatomical features (autapomorphies marked by asterisk—see also Fig. 4): humerus with deltopectoral crest protruding craniomedially for more than twice the shaft diameter, with distal lamina forming an abrupt corner (about 90°) with the proximodistal axis of the humeral shaft; metacarpal II with hypertrofied semicircular extensor lip protruding over the condylar level* and bordering dorsolaterally a very deep and wide extensor pit; phalanx II-1 with flexor palmar groove which is deep and narrow*, and bearing a distinct bump distal to the dorsal extensor process*; manual ungual III with prominent flexor tubercle which is distinctly separated from articular facet by a concave cleft. 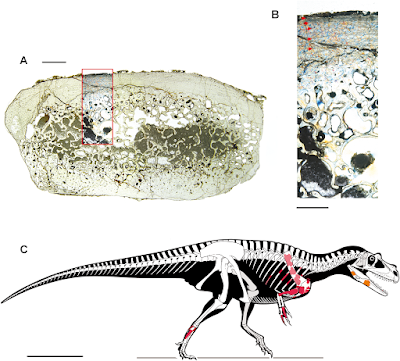 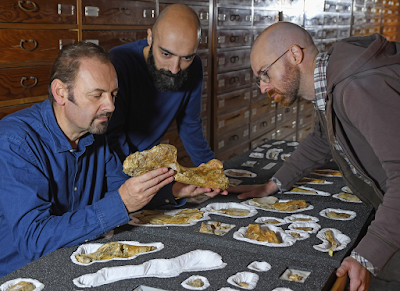 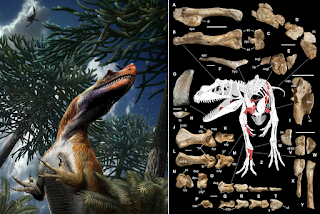 Conclusions
Saltriovenator zanellai gen. et sp. nov. is a new theropod dinosaur from the Lower Jurassic of Northern Italy. It represents the third named species of non-avian dinosaur from Italy, the first of Jurassic age. Saltriovenator shows a combination of ceratosaurian and tetanuran features, supporting close relationships between the two averostran lineages with the exclusion of coelophysoid-grade theropods. It also represents the first skeletal material supporting the occurrence of large and robustly-built predatory dinosaurs just at the aftermath of the Triassic–Jurassic boundary extinction events. Accordingly, the Italian ceratosaurian fills a stratigraphic and ecomorphological gap between the relatively more gracile coelophysoid-grade neotheropods (known from the Late Triassic to the Early Jurassic) and the large-bodied averostrans that occupied the majority of the apex predatory roles in the terrestrial ecosystems between the Middle Jurassic and the end of the Cretaceous.

The phylogenetic framework integrated with the new combination of features present in Saltriovenator dismisses the “II–III–IV homology pattern” in the interpretation of the tetanuran (and avian) hand, and suggests a complex process leading to the atrophied forelimb of later ceratosaurians. The evolution of a stocky and robust hand occurred in ceratosaurians before the relative shortening and the loss of predatory function: such a step-wise scenario raises intriguing perspectives on what adaptive and developmental factors led from a “Saltriovenator-like” condition to the aberrant condition present in Limusaurus and abelisaurids.

The oldest large-sized predatory dinosaur comes from the Italian Alps phys.org/news/2018-12-oldest-large-sized-predatory-dinosaur-italian.html via @physorg_com