Abstract
The Hyloscirtus larinopygion group is a clade of 16 species of large hylids that inhabit cascading Andean streams. They have brown coloration that, in most species, contrasts with bright marks. Herein morphological and genetic evidence is used to describe a new species of the group from Cordillera del Cóndor, a sub-Andean mountain chain that has phytogeographic affinities with the Guianan Tepuis. The new species is characterized by dark-brown coloration with contrasting bright orange flecks and by the presence of an enlarged and curved prepollex protruding as a spine. The new species is closely related to H. tapichalaca and an undescribed species from the southern Andes of Ecuador. The genetic distance between Hyloscirtus hillisi sp. n. and its closest relative, H. tapichalaca, is 2.9% (gene 16S mtDNA). Our phylogeny and a review of recently published phylogenies show that amphibians from Cordillera del Cóndor have close relationships with either Andean or Amazonian species. Amphibians do not show the Condor-Guianan Tepuis biogeographic link that has been documented in plants.

Etymology: The specific name is a noun in the genitive case and is a patronym for David Hillis, an evolutionary biologist who has made significant contributions to the study of the evolution of amphibians and reptiles. During the 1980s, David Hillis carried out fieldwork in Ecuador that resulted in the discovery of three undescribed species of the H. larinopygion group. In 1990, in collaboration with WE Duellman, he published the first phylogeny for the H. larinopygion group using allozyme data (Duellman and Hillis 1990). Currently he is professor at the University of Texas in Austin.

Distribution and natural history: Hyloscirtus hillisi is only known from two nearby sites (airline distance = 1.7 km) on the slopes of a flattop limestone mountain in the Río Quimi basin, Provincia Zamora Chinchipe, at elevations between 1991 and 2134 m (Figure 2). Biogeographic region is Eastern Montane Forest according to Ron et al. (2018) classification. Vegetation at the type locality (Figure 11B, C) was dominated by shrubs (1.5 m tall) with sparse trees (10–15 m tall). The ground had cushioned consistency and was covered by roots and bare soil. Mosses and ground-bromeliads were abundant. This type of ground cover is locally known as bamba. Two adults and one juvenile were found on shrubs next to small streams on the Río Cristalino basin, at an elevation of 2134 m. The tadpoles and juveniles were found in ponds on the margin of Río Cristalino, at an elevation of 1991 m (Figure 11D). Collections took place in July 2017 and April 2018. The site where the adults were collected is ~500 m from the border between Peru and Ecuador. Therefore, the occurrence of H. hillisi in Peru is almost certain. 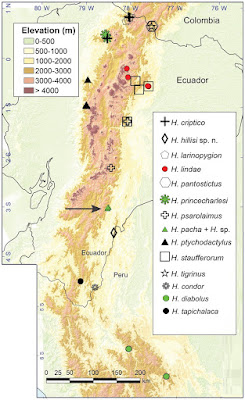 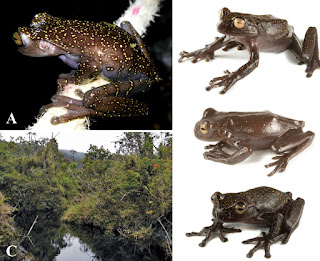 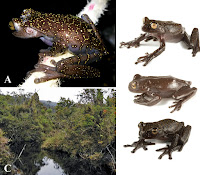