Abstract
Although fragmentary remains of sturgeon, such as scutes and pectoral spines, are relatively common in fossil deposits, articulated fossilized skeletons are rare in Upper Cretaceous sediments of North America. Currently, there are four extinct species referred to Acipenseridae reported from the Upper Cretaceous of North America; two of them (†Acipenser eruciferus and †A. albertensis) are of doubtful validity because they are based on isolated elements that are probably not diagnostic. Only two species, †Priscosturion longipinnis and †Protoscaphirhynchus squamosus, have been described based on articulated skeletons. In June 2016, an articulated sturgeon specimen was discovered in the Campanian Dinosaur Park Formation of Dinosaur Provincial Park, Alberta, Canada. This specimen preserves the skull and anterior half to two-thirds of the body but is missing the pelvic, dorsal, anal, and caudal fins. This new specimen cannot be included in any of the previously named taxa, so we describe it here as a new genus and species, †Anchiacipenser acanthaspis. A combination of several characters allows us to diagnose the new sturgeon from Dinosaur Provincial Park as a new taxon, including the dermal cranial bones being strongly ornamented with straight and anastomosing ridges, the dorsal scutes being large and laterally expanded and bearing median spines, and the presence of an extensive cover of smaller dermal scales on the flanks. A phylogenetic analysis indicates that this new taxon belongs in Acipenseridae, although its precise relationships within this clade are not clear. 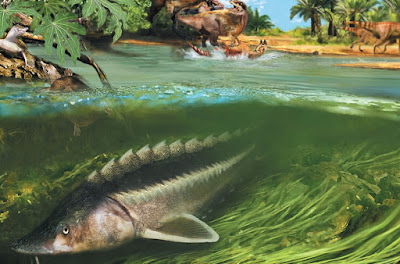 Diagnosis— As for type and only known species.

Derivation of Name:— From the Greek word ‘anchi,’ meaning near or close, and the Latinized Greek word ‘acipenser,’ relating to sturgeons, referring to the phylogenetic position of this genus as a member of the family Acipenseridae. Gender is masculine.

Etymology:— From the Greek words ‘acantha’ meaning thorn or spine, and ‘aspis’ meaning shield, in reference to the strong spines that are present on most of the dorsal scutes. 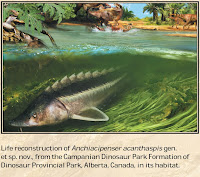 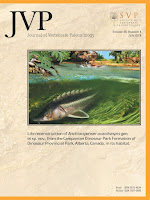