Abstract
A new species of Indian caeciliid caecilian, Indotyphlus maharashtraensis (Amphibia: Gymnophiona), is described based on a series of 12 specimens from the northern Western Ghats of the State of Maharashtra. This species differs from the only other species in the genus, I. battersbyi, in having fewer primary annuli, many more primary annuli bearing secondary annular grooves, and in the presence of a modified subterminal region that has a depressed preanal strip extending anteriorly from around the vent. A key to the species of Indotyphlus is provided.

Diagnosis: An Indotyphlus differing from I. battersbyi in having secondary annular
grooves present anterior to the 100th primary annulus behind the nuchal collars, and in
having a depressed preanal strip (longer in adult males) anterior to the disc surrounding the vent.

Etymology: The species is named for Maharashtra, the Indian State within which the type locality lies. 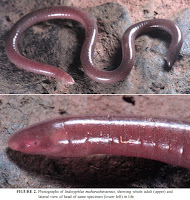