Abstract
The Early Cretaceous basal birds were known largely from just two-dimensionally preserved specimens from north-eastern China (Jehol Biota), which has hindered our understanding of the early evolution of birds. Here, we present a three-dimensionally-preserved skeleton (FPDM-V-9769) of a basal bird from the Early Cretaceous of Fukui, central Japan. Unique features in the pygostyle and humerus allow the assignment of FPDM-V-9769 to a new taxon, Fukuipteryx prima. FPDM-V-9769 exhibits a set of features comparable to that of other basalmost birds including Archaeopteryx. Osteohistological analyses indicate that FPDM-V-9769 is subadult. Phylogenetic analyses resolve F. prima as a non-ornithothoracine avialan basal to Jeholornis and outgroup of the Pygostylia. This phylogenetic result may imply a complex evolutionary history of basal birds. To our knowledge, FPDM-V-9769 represents the first record of the Early Cretaceous non-ornithothoracine avialan outside of the Jehol Biota and increases our understanding of their diversity and distribution during the time. 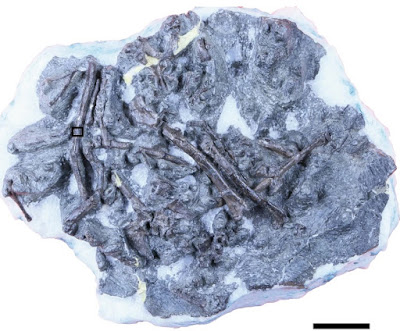 Etymology: Fukui refers to Fukui Prefecture in central Japan, where the specimen was collected, and pteryx (Latin) for wing; prima (Latin) for primitive, as the species exhibits several primitive morphological features among fossil birds.

Diagnosis: A pigeon-sized non-ornithothoracine avialan with the following autapomorphies: semicircular depression on the craniodorsal corner of the humeral head, dorsally bowed humeral shaft, and robust pygostyle with incipient spinal processes and paddle-like structure at the distal end. 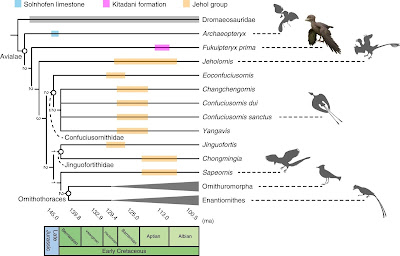