[Mollusca • 2017] “Dwarfs among Pygmies”: the Genus Punctum (Gastropoda: Eupulmonata: Punctidae) in western Africa and the Congo Basin, with Descriptions of Two New Species and Notes on other Afrotropical punctoids

Species of the genus Punctum Morse, 1864 are reported for the first time from western Africa and the Congo Basin: P. camerunense nov. spec. from Cameroon (Mount Cameroon), P. nimbaense nov. spec. from Liberia (Mount Nimba), and an unidentified, possibly undescribed, species from the Democratic Republic of the Congo (Banalia, Tshopo Province). Representatives of the genus Punctum in sub-Saharan Africa were hitherto known from the eastern parts of the continent only. The newly described western African Punctum species were all collected above 1200 m altitude. It is suggested that altitude might be a factor explaining the apparent rarity of Punctum in West Africa: areas elevated above 1000 m are rather restricted in western Africa, whilst they are widespread in eastern Africa. However, the finding of a single shell below an altitude of 450 m in the Congo Basin seems to contradict this elevation hypothesis. Shells of P. pallidum reported by van Bruggen from Malawi and Zambia are illustrated for the first time. Apart from P. adami, P. pallidum, and the western African species reported in this paper, the Afrotropical Punctum species hitherto described appear to have substantially larger shells than the western African taxa and may be better assigned to a different genus, perhaps Paralaoma. 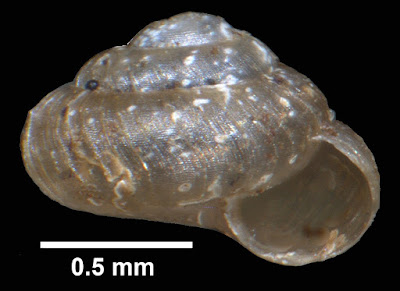