ABSTRACT
The enigmatic ‘Spectacled Flowerpecker’—a probable new bird species from the island of Borneo—was first sighted in the Danum Valley of Sabah, Malaysia in 2009. However, the absence of a holotype specimen has prevented its formal scientific description. Since then only a handful of reports from widely disparate localities across the island have emerged, all from lowland sites and often in close association with fruiting mistletoe. Here, we report the long-awaited capture of a specimen of this putative new species and confirm its morphological and molecular distinctiveness as a novel species in the genus Dicaeum. 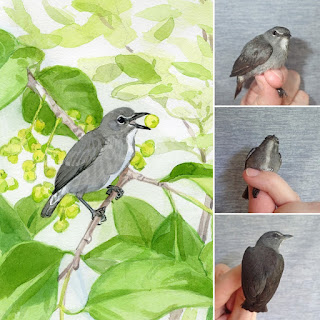 Diagnosis.— Phenotypically assignable to the genus Dicaeum Cuvier, 1816, by short thin bill, specialized (bifid and semi-tubular) tongue morphology (Fig. 4), and a greatly reduced outermost primary feather (Mayr & Amadon 1947, Salomonsen 1960a,b, Morioka 1992). Diagnosable as distinct from other species of Dicaeum by the following combination of characters; (1) rows of white orbital feathers above and below the eye, forming thin, but conspicuous white arcs; (2) entirely gray and white plumage coloration with no evidence of carotenoid pigments in the adult plumage; (3) short distal bill length (6 mm from nares to bill tip). Field observations indicate that the eye-arcs of putative males are even more strongly expressed than in the female holotype. The strong white eye-arcs of D. dayakorum are unique in Dicaeidae, although traces of pale eye-arcs are known to be present in female and juvenile plumages of a few other species (e.g. D. monticolum, D. agile, D. pygmaeum). Red and yellow carotenoid pigments are evident in the plumage of most species of Dicaeum. The apparent lack of these pigments in the adult female holotype and field observations of putative adult males sets D. dayakorum apart from most of its congeners.

Etymology.— We name Dicaeum dayakorum in honor of the Dayak people of Borneo. Their immense knowledge of the flora and fauna of their homeland forests is irreplaceable and crucial to future conservation efforts of Borneo’s endemic ecosystems.
The English name of ‘Spectacled Flowerpecker’ is assigned as proposed by Edwards et al. (2009), and refers to the broken eye-ring that is this species’ most characteristic and easily recognized plumage feature. This name also has the benefit of established usage in the ornithological and birdwatching community. 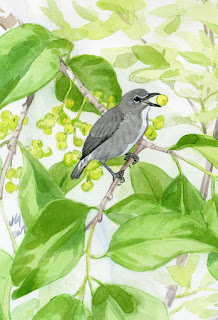 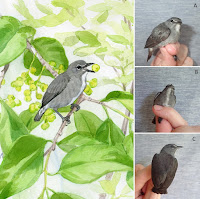