A new species of Arapaima has been discovered from the central Amazon of Brazil. This new taxon is readily distinguished from all other Arapaima by the following three characters: 1) dorsalmost lateralis sensory cavity on preopercle extremely slender (vs. broadly oval or nearly rectangular in other nominal taxa); 2) ventrolateral margin of head where third infraorbital meets anterior limb of preopercle strongly angled such that ventral surface of head is almost flat (vs. ventrolateral margin of head relatively rounded); and 3) anterior third of dorsal-fin base covered with an enlarged, thickened sheath that hides anterior dorsal-fin rays when adpressed (vs. no thickened sheath on anterior base of dorsal fin and anterior dorsal-fin rays visible when adpressed). Distinguished from all other Arapaima except A. agassizii by having extremely long fourth infraorbital. Distinguished from A. arapaima and all other examined non-type specimens by notably slender body (the holotypes of A. gigas, A. mapae, and A. agassizii also have slender bodies). Further distinguished from A. mapae and A. agassizii by having relatively deep caudal peduncle (6.0% SL, vs. 4.0% in latter two taxa), and from A. gigas by having dentary teeth in a single row (vs. dentary teeth in 2–2.5 irregular rows). This species was collected near the confluence of the Solimões and Purus rivers in Amazonas State, Brazil. It is the first new species of Arapaima to be described since 1847, and comparisons with Arapaima from Mamirauá Reserve demonstrate that there are at least two species of Arapaima present in Amazonas State. 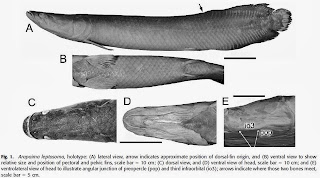 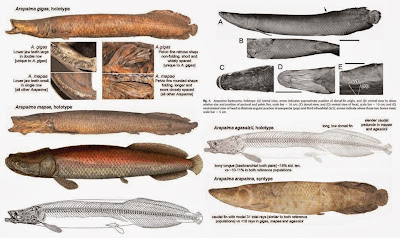