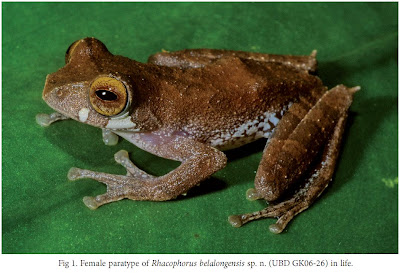 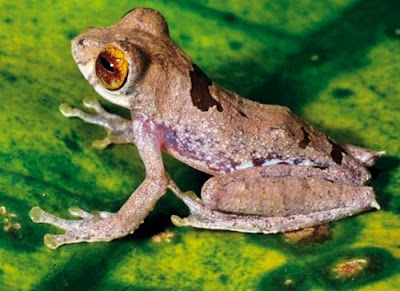 Rhacophorus belalongensis sp. n. (Figs. 1-7)
Holotype: ZMB 70377, adult female, from Sungai Anak Esu, a tributary of Sungai Belalong (4°32’34’’N, 115° 09’33’’E, ca. 60-200 m elevation), near Kuala Belalong Field Studies Centre, Temburong district, Brunei darussalam (Borneo), collected by T.U. Grafe and A. Keller, 10 July 2006.
Distribution: The new species is known only from several small tributaries of both Sungai Belalong and Sungai Temburong in the area of the conluence of the two rivers.
Etymology: The new species is named after the Sungai Belalong valley, where it was discovered. 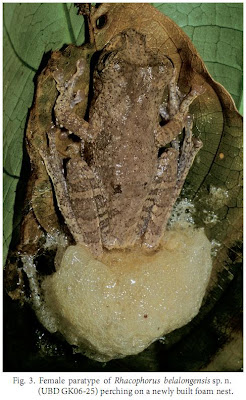 Fig. 3. Female paratype of Rhacophorus belalongensis sp. n. (UBd GK06-25) perching on a newly built foam nest.
Belalong tree frog | Rhacophorus belalongensis
BorneoNewWorld-2010 via WWF
As a result of the Heart of Borneo declaration, 58 percent of Brunei Darussalam’s national territory will fall under some level of environmental protection, good news for new species such as the Belalong tree frog, Rhacophorus belalongensis, discovered in 2008. This species was discovered in the Sungai Belalong basin in the Temburong district, hence its name, and it is miniature: males barely measure more than 3cm and females usually less than 3.8cm species. The species was encountered in the rainforests of Brunei, where it was found on vegetation next to small, fast-flowing creeks at heights between one and three metres above the ground. Scientists also heard the frog calling from the very tops of trees up to 10m high. 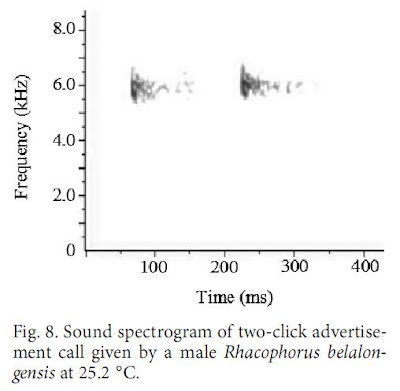