Abstract
A new species of green pit vipers of the genus Trimeresurus Lacépède, 1804 is described from the lowlands of western Arunachal Pradesh state of India. The new species, Trimeresurus salazar, is a member of the subgenus Trimeresurus, a relationship deduced contingent on two mitochondrial genes, 16S and ND4, and recovered as sister to Trimeresurus septentrionalis Kramer, 1977. The new species differs from the latter in bearing an orange to reddish stripe running from the lower border of the eye to the posterior part of the head in males, higher number of pterygoid and dentary teeth, and a short, bilobed hemipenis. Description of the new species and T. arunachalensis Captain, Deepak, Pandit, Bhatt & Athreya, 2019 from northeastern India in a span of less than one year highlights the need for dedicated surveys to document biodiversity across northeastern India. 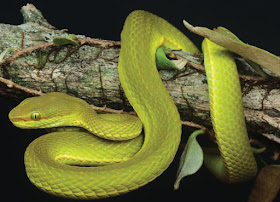 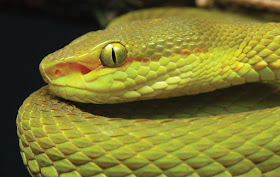 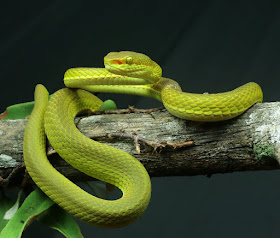 Etymology: The specific epithet is a noun in apposition for J.K. Rowling’s fictional Hogwarts School of Witchcraft and Wizardry’s co-founder, Salazar Slytherin. He was a Parselmouth that links him to serpents. Suggested common name: Salazar’s Pit Viper.

Diagnosis: A species of the genus Trimeresurus with (1) 1st supralabial fused with nasal; (2) 19–21 moderately keeled dorsal scale rows at midbody; (3) dorsal colouration greenish yellow in both sexes; (4) an orange to reddish stripe extends from the posterior borders of the preocular, running through the lower margin of the eyes to the lateral side of the nape in males; (5) ventrolateral stripe predominantly yellow with a faint orange at the base in males, yellow in females; (6) tail to total length ratio (TaL/TL) 0.18 in males, 0.14 in females; (7) short, bilobed hemipenis reaching 8th caudal scale; (8) 6 palatine, 15 pterygoid and 19 dentary teeth. 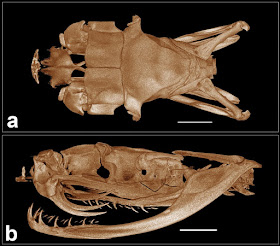 Natural history notes: the type specimens were found during night search between 1800–2200 hours along a road. Both individuals were found coiled on shrubs along the road. A third individual was seen but escaped in the thick undergrowth. Three individuals were seen during night searches in six nights. Other serpent species observed at the locality include Boiga gokool (Gray, 1834), Boiga cyanea (Duméril, Bibron & Duméril, 1854), and Lycodon jara (Shaw, 1802). For now, the new species is known only from the type locality. The specimens, ZMUC R69255 & ZMUC R69256 were collected from Assam and it is likely that the new species may occur in the adjoining state sharing similar biotope. 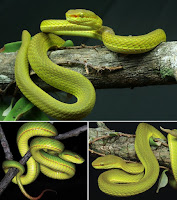 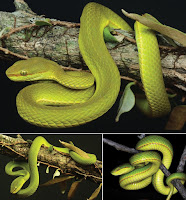 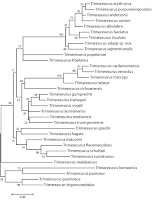