Abstract
A new species of tyrannosaurid from the upper Two Medicine Formation of Montana supports the presence of a Laramidian anagenetic (ancestor-descendant) lineage of Late Cretaceous tyrannosaurids. In concert with other anagenetic lineages of dinosaurs from the same time and place, this suggests that anagenesis could have been a widespread mechanism generating species diversity amongst dinosaurs, and perhaps beyond. We studied the excellent fossil record of the tyrannosaurid to test that hypothesis. Phylogenetic analysis places this new taxon as the sister species to Daspletosaurus torosus. However, given their close phylogenetic relationship, geographic proximity, and temporal succession, where D. torosus (~76.7–75.2 Ma) precedes the younger new species (~75.1–74.4 Ma), we argue that the two forms most likely represent a single anagenetic lineage. Daspletosaurus was an important apex predator in the late Campanian dinosaur faunas of Laramidia; its absence from later units indicates it was extinct before Tyrannosaurus rex dispersed into Laramidia from Asia. In addition to its evolutionary implications, the texture of the facial bones of the new taxon, and other derived tyrannosauroids, indicates a scaly integument with high tactile sensitivity. Most significantly, the lower jaw shows evidence for neurovasculature that is also seen in birds.

Etymology: Horneri, Latinized form of Horner, in honor of Jack Horner, in recognition of his successful field program in the Two Medicine Formation that has recovered many new species of dinosaurs that are critical for our understanding of the palaeobiology of dinosaurs in Laramidia, support in the preparation and curation of these specimens, and to acknowledge that his mentoring efforts have launched many professional scientific careers. 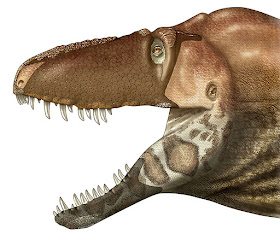