Abstract
During the latest Cretaceous, distinct dinosaur faunas were found in Laurasia and Gondwana. Tyrannosaurids, hadrosaurids, and ceratopsians dominated in North America and Asia, while abelisaurids and titanosaurids dominated in South America, India, and Madagascar. Little is known about dinosaur faunas from the latest Cretaceous of Africa, however. Here, a new abelisaurid theropod, Chenanisaurus barbaricus, is described from the upper Maastrichtian phosphates of the Ouled Abdoun Basin in Morocco, North Africa on the basis of a partial dentary and isolated teeth. Chenanisaurus is both one of the largest abelisaurids, and one of the youngest known African dinosaurs. Along with previously reported titanosaurid remains, Chenanisaurus documents the persistence of a classic Gondwanan abelisaurid-titanosaurid fauna in mainland Africa until just prior to the end-Cretaceous mass extinction. The animal is unusual both in terms of its large size and the unusually short and robust jaw. Although it resembles South American carnotaurines in having a deep, bowed mandible, phylogenetic analysis suggests that Chenanisaurus may represent a lineage of abelisaurids that is distinct from those previously described from the latest Cretaceous of South America, Indo-Madagascar, and Europe, consistent with the hypothesis that the fragmentation of Gondwana led to the evolution of endemic dinosaur faunas during the Late Cretaceous.

Etymology. The genus name refers to the Sidi Chennane phosphate mines, the type locality, and Greek ‘sauros, ‘lizard’. The species name is derived from the Greek barbaros, “savage” or “barbaric” and also refers to Barbary, a name historically used for Morocco and the northwest coast of Africa.

Horizon and Locality. The type specimen is reported as coming from the upper Maastrichtian (Couche III) of Sidi Chennane; the pale white color of the bone and the color of the associated matrix are consistent with the preservation seen in other material recovered from this locality. The isolated premaxillary teeth come from the upper Maastrichtian (Couche III) of Sidi Daoui. The maxillary tooth is of unknown provenance but likely comes from either Sidi Chennane or Sidi Daoui. All specimens come from the Ouled Abdoun Basin, Morocco North Africa (Fig. 1). 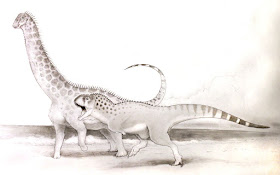 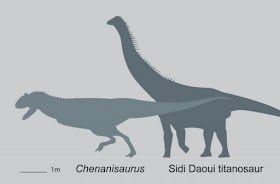 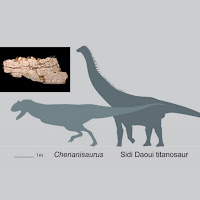 New moderately-sized abelisaur. I thought the silhouette in the paper was too majungasaurine, so I made my own with blackjack and hookers.
Dentary line drawing from Longrich et al. (2017), silhouette from Rugops by Crizz30 on Commons, human from Andrew Farke on Phylopic as usual.
The last dinosaur on Earth? http://blogs.nature.com/houseofwisdom/2017/04/the-last-dinosaur-on-earth.html